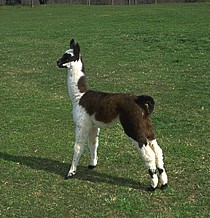 Alpacas are a domesticated South American camelid. Larger than sheep, but much smaller than llamas, they are unsuitable as pack animals. Currently they are bred only for their fleece which comes in a multitude of natural colors. In the textile industry, "alpaca" primarily refers to the hair of Peruvian alpaca, but more broadly it refers to a style of fabric originally made from alpaca hair but now often made from similar fibers, such as mohair, Icelandic sheep wool, or even high-quality English wool. Alpaca fleece is fiber, similar to sheeps wool in some respects, but lighter in weight, silkier to the touch, warmer, not prickly, and bears minimal lanolin which makes it nearly hypoallergenic. It is soft and luxurious.

This information courtesy of an extensive entry in Wikipedia on alpacas. 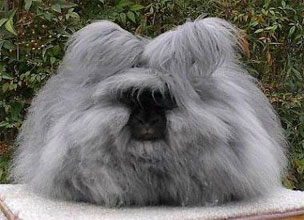 Angora fiber comes from the angora rabbit while the fiber from angora goats is known as mohair. It is a soft thin fiber with a silky texture and a "halo (fluffiness)."

There are four different breeds of angora rabbits; English, French, Satin, and German. Each breed has a different quality of fiber and available colors. Angora rabbits can be high maintenance requiring frequent grooming to prevent matting of the hair. Angora fur is produced in Europe, Chile, China and the United States. Harvesting occurs up to four times a year (about every 4 months) coinciding with the natural molting of the rabbit. The fur is collected by plucking (non-painful pulling of the shed hair), shearing, or collection of already shed hair.

This information courtesy of an extensive entry in Wikipedia on angoras. 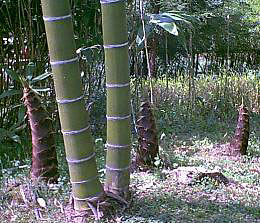 Bamboo plants are actually a member of the grass family. There are about 1,000 species of bamboo that grow in such diverse environments as the Himalaya and sub-Saharan Africa. The young tips of some of the larger species can grow more than a meter a day. Bamboo is most famously known as the food of the Giant Panda. Bamboo has been used to replace reinforcing rods in concrete construction, and yet the fiber made from bamboo is known for softness and also its antibacterial properties.

This information courtesy of an extensive entry in Wikipedia on bamboo. 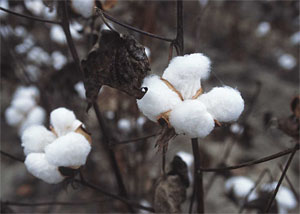 Cotton is a soft fiber that grows around the seeds of the cotton plant, a shrub native to tropical and subtropical regions around the world, including the Americas, India, and Africa. However, virtually all of the commercial cotton grown today worldwide is grown from varieties of two native American species. The fiber is most often spun into yarn or thread and used to make a soft, breathable textile, which is the most widely used natural-fiber cloth in clothing today.

Cotton fiber, once it has been processed to remove seeds and traces of wax, protein, etc., consists of nearly pure cellulose. After processing the cellulose is arranged in a way that gives cotton fibers a high degree of strength, durability, and absorbency. Each fiber is made up of twenty to thirty layers of cellulose coiled in a neat series of natural springs. When the cotton boll is opened, the fibers dry into flat, twisted, ribbon-like shapes and become kinked together and interlocked. This interlocked form is ideal for spinning into a fine yarn. Courtesy of Wikipedia. 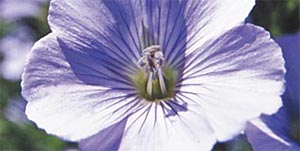 Flax has been grown in Europe since neolithic times for the fiber to produce cloth, and flowering flax plants are pictured on the tomb and temple walls in Thebes. Flax fiber is used in the production of rope as well as in the production of fine linen fabrics such as damasks and lace.

Before flax can be spun it must be retted, broken, scutched, and finally pulled through hackles. Retting is the process by which the inner core is rotted away by exposure to water leaving the outer fibers intact. Different means of retting produce different qualities of flax from pond retting which produces the worst but is fast to dew retting which is slow but gives the best quality flax fiber. Breaking the flax by beating it helps separate the straw from the fiber. The flax is then hung vertically and a wooden scutching knife is drawn down through the fibers scraping off most of the straw. The final step is pulling the fibers through a series of hackles. A hackle is a bed of "nails"- sharp, long-tapered, tempered, polished steel pins driven into wooden blocks at regular spacing. Now you can spin the flax fiber. More detailed information is in Wikipedia. 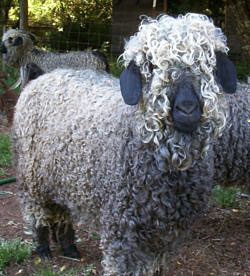 Mohair usually refers to a silk-like fabric or yarn made from the hair of the docile Angora goat. The word "Mohair" was adopted into English before 1570 from the Arabic mukhayyar, a type of haircloth, literally 'choice', from khayyara, 'he chose'. Angora fiber is from the Angora rabbit.

The angora goat is thought to originate from the mountains of Tibet and were introduced in to Turkey in the 16th century. Until 1849 the Turkish province of Ankarra was the sole producer of Angora goats. In 1849 Angora goats made their way to America as a gift from Turkey. For more information on Mohair visit Wikipedia. 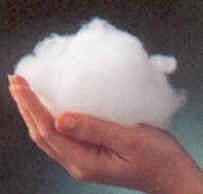 Georges Audemars developed the first "artificial silk" about 1855, but his method was impractical for commercial use. Hilaire de Charbonnet, Comte de Chardonnay, patented "Chardonnay silk" in 1884, but it was so flammable it had no safe use. Finally, in 1894, Charles Frederick Cross, Edward John Bevan, and Clayton Beadle patented the first safe and practical artificial silk, which they named "viscose." The name "rayon" was adopted in 1924, with "viscose" being used for the viscous organic liquid used to make both rayon and cellophane. Rayon is a manufactured by chemically treating cellulose, and is therefore neither a synthetic nor a natural fiber, but it is manufactured using a renewable, non-petrochemical resource.

Lyocell (Trademark Tencel) is a man-made cellulose fiber made from wood pulp in an environmentally friendly manner, considered a sub-category of rayon. Like other natural fibers, lyocell is absorbent, breathable, and accepts dyes well. Lyocell is known for its strength in both a wet and dry state (stronger than cotton). It has a silky and lustrous appearance. 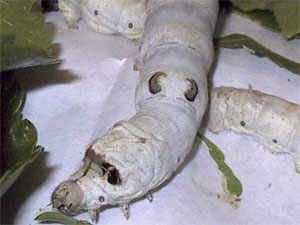 Silk is obtained by unraveling the silk fiber from cocoons. The silkworm Bombyx mori is raised in captivity allowing the cocoon to be harvested before the moth hatches. Wild silk or tussah silks are obtained from caterpillars that have not been artificially cultivated and thus the cocoons have been damaged by the emerging of the moth. The single strand of cultivated silk is stronger and usually takes dye more easily. Both silks have a triangular, prism like, structure which refracts light giving silk its marvelous luster. Silk is the strongest natural fiber. Silk noil (silk waste) is spun from the inner portions of the cocoon. For more information visit Wikipedia.

Scanning electron micrograph of a polyester.

Lurex is the brand name for a type of yarn with a metallic appearance. The twine is most commonly a synthetic fibre, onto which an aluminium layer has been vaporised.

Nylon was the first commercially successful polymer and the first synthetic fiber to be made entirely from coal, water and air. It was designed to have the look and feel of silk.

Federal Trade Commission Definition for Polyester Fiber: A manufactured fiber in which the fiber forming substance is any long-chain synthetic polymer composed of at least 85% by weight of an ester of a substituted aromatic carboxylic acid, including but not restricted to substituted terephthalic units, p(-R-O-CO- C6H4-CO-O-)x and parasubstituted hydroxy-benzoate units, p(-R-O-CO-C6H4-O-)x. Think petrochemicals.

Wool has two properties that make it better for the production of yarn than hair or fur. It has scales that overlap like the shingles on a roof and it has bends (crimps). Hair has few if any scales and no crimp. The scales and crimp makes the wool stick together better for spinning or felting. The crimp also contributes to the bulk and loft of wool which is what gives it such good insultating properties. Different wools have different amounts of crimp, fine merino may have as many as 100 crimps per inch while a coarser yarn like karakul may only have one to two crimps per inch. For more information, Wikipedia.