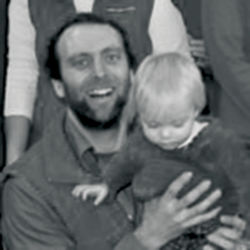 The Man, the Myth, the Legend: Michael Patterson. 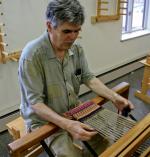 A living legend, that’s this month’s staff feature: Michael Patterson, our beloved and long time instructor! Michael has been teaching classes since the mid 1990’s for us, and as such has a loyal following. It’s always fun to see his classes in action – who knew that weaving could be such a raucous and boisterous pass time?!?!

Michael has been in the area for ages now, having moved here with Margaret (wife), and Joshua (son), in ’75. He’s established strong ties. Mike’s first career was as an RN in intensive/emergency care. Wow you say, how do you transfer from that high intensity environment to the weaving studio (his current occupation)? “Actually, I started weaving while working in intensive care; it was a great non-stress activity” says Michael. Before opening his current studio, he also worked full time at Halcyon Yarn for several years. While Margaret keeps after Michael to keep up with his chores (“when are you going to weave me that yardage I need for my sewing project!), Joshua is just as happy to leave his fiber ties untended (“Joshua has limited his ‘fiber’ history to having a small flock of Montadale sheep while in the 4H” says Mike).

Michael is more than just a master weaver too – interested in a course in spinning, dyeing, or Kumihimo? He’s your man, able to explain time tested techniques and cutting edge experiments with equal parts skill and humor.

Outside of weaving, Michael enjoys “music and ADHD style internet surfing”. Luckily for us he frequently finds time to stop by Halcyon Yarn outside of classes too – A great opportunity for us to try to “stump the master” with anything weaving related… Though, truth be told, we haven’t succeeded in stumping him yet!

Be sure to keep an eye on the classes page, and sign up for one of his great classes! Also, keep an eye out as we develop a series of online video tutorials with Michael… More to come soon!

One thought on “The Man, the Myth, the Legend: Michael Patterson.”